A few words of history…

The word « Cadenède » (Cadeneda in occitan language) means a field covered by « cades » i.e. junipers. You can find some ones around the house, and pick its black berries useful for cooking and to produce gin!

Since the Neolithic period (circa 3000 B.C.), an “open station “took place just over the hamlet of Soulobres. A bit more recently were raised the 4 dolmens, megalithic burials. The nearest  is hardly located  2 km from the house. You can go there by foot, mountain-biking (see our map) or driving through the  subway under the motorway, which is to be taken on the right side of the road, before the viaduct. Several axes (Bronze  Period1500 B.C.),were found hereabout and can be seen in the Musée de Millau (place Foch). They are the real proof the spot was inhabited in the Ancient Times. (Elevated positions were always chosen to better organize a defense against possible attackers).

Geology is very complex and diversified. It allowed in the past centuries to extract copper, lead and barium oxide. You can see the white stains of the latter on the corniches-cliffs, under la Cadenède and above the small road to Peyre.

La « Boria de la Cadeneda » in the past was fortified. Its proud outline is still visible from Millau, lookink like an old cloister. A 1289 authenticated record   reports the Mas de la Cadeneda was linked to the Saint Pierre de Brocuéjouls parish. You can see this charming small chapel, 300 meters from the northern side of the Viaduct. You can also go there, walking, biking or driving. This chapel was built during the XIth century. 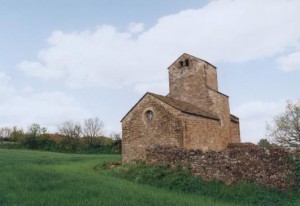 The authenticated  record  of the  tower in 1289 is prooving that  la Cadenède was an official fief at least for the XIIIth century. It was protecting the  peasants from Soulobres and Brocuéjouls when they were threatened. They were  attacked  by the Routiers during the Hundred Years War (XIV-XVth century) . when these soldiers were not paid by pro-English or pro-French, they were  “razzing”civilian population, stealing their goods i.e.mainly their sheep. One time the lord was out, the robbers took the flock of sheep. Coming back to the Cadenède, he could be informed on their escape way. He succeeded to join them at the top of the Larzac heights. To avoid a risky and bloody fight, he accepted to pay a ransom, and brought back the sheep to the house.

The domaine successively belonged to  J. Tholose, from Castelmus in 1416, then to Desirada Vincens in 1452, then to  J. Hugla, merchant in  Montpellier, who rented out this farm to Jean Boyer in 1596. Then  it seems  la Cadenède belonged to the Convent of the Frères Mineurs in Rodez.

But an important step took place during the XVIIth century, more precisely in     1660. The final global layout is provided, with its 4 building bodies surrounding the square yard, the two small angle échauguettes  and the “bretèche”, built above the entrance portal, to protect it. As a matter of fact, the owner, François de Courtines, became powerful, since he was chosen by the king to collect the Millau taxes. He owned more than twenty properties. He officially became the Bailly de Millau. At that time, the king is Louis the XIVth… He might have seen such an architecture type in Paris. The architect and the masons were clever enough to « merge » the oldest 3 houses which are the northern building (appartments Causse Rouge and Courtines) and the 2 southern buildings (appartments Troubadours and Templiers). You still can discover some   separations on the outer walls.  For instance on the left side of the fitness room, the « chaufferie”door was built during the XVth century. The works in 166O reduced it one half.

The family de Courtines, then called de Sambucy de Courtines, has its coat of arms. It was placed above the entrance up to 1964, when the previous owner decided to withdraw it (to protect it) and put it above the main fire-place in the Salon Troubadours. This coat of arms is “explaning arms”type : as a matter of fact, the family name « Courtines » means « flag » or « canopy » used to protect from the sun or rain a lord or a bishop when walking. A hand is holding this canopy in the upper part of the coat. In its lower part, you can see a cross above the earth globe and a silver moon crescent). This last detail, the moon, could only be beard by a knight having fought in the Holy Land during the Crusades. 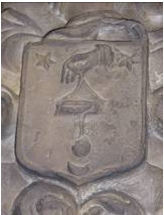 Several news items were written in 1732 before the Révolution, poaching, fruit picking and wood gathering (for heating). But there were no special violent events. On the 30th of  frimaire (revolutionnary calendar) 1792, François Boyer, from la Cadenède, obtained a « certificate of civism » granted for  «elected horseman » to complete the Horsemen regiment « la montagne » for the Commune de Millau.

For the XIXth century la Cadenède has steadily been decading. Owned by people not living there, it was operated by low-income farmers. The Marcel Pagnol films, as “Manon des Sources”, enable us to better understand how difficult was the rural way of life in few fertile regions. Let us not forget this part of Millau was called « Pays Maigre », because of the thin earth layer over the rocky ground.

A sale-publicity was published on the 11th of September 1858, in the newspaper L’Echo de la Dourbie ».

The official population census allow us to know the following farmers :

At the  XXth century beginning, the Barthe family then is managing the farm. Its descendants Lucien and Suzanne, now back to Millau, provided us these pictures. 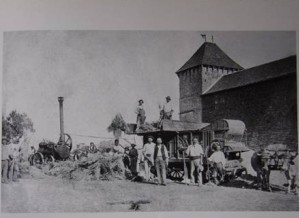 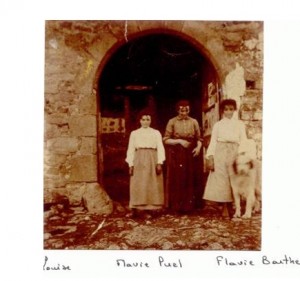 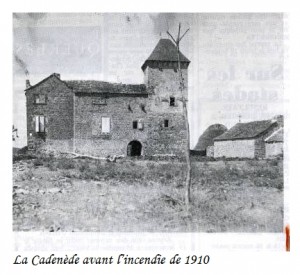 On the 6th of August 1910 « Messager de Millau », newspaper, we can read: «On the saturday 30th of July, at 6 pm, the fire bells rang, freightening the population. A big fire bursted out in la Cadenède, a big farm, 3 km from Millau. The fire began in the northern barn and quickly spread in the whole house. No means at that time to fight the fire, and the total collapsing cannot be avoided.

« And the widow Barthe, the likeable farmwoman, and her numerous family grieved in front of this terrifying scenery which was destroying all that they owned. Without any water, the village neighbours could not efficiently help. Happily, the Barthe family was protected by an insurance contract, so as the owner, Roger de Lahondes de Laborie, a gentleman farmer in Mende (Lozère) ». 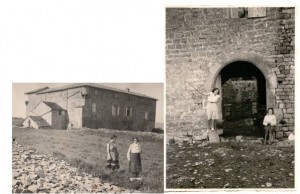 Pictures taken after the fire and the first restoration in the XXth century.

Happily and cheerfully for Juliette and Flavie in 1929.

In the  1960s, the family Daures was  the last one to operate the farm. 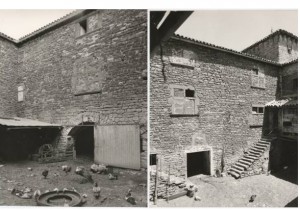 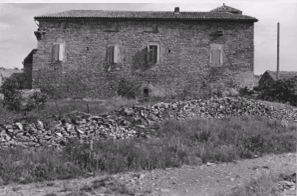 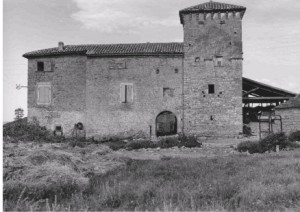 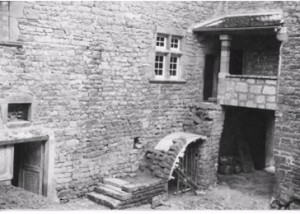 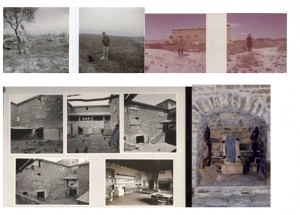 In 1964, Jean-Pierre Ficholle, a plastic manufacturer, buys la Cadenède with his wife. From a rich textile manufacturers family, and emigrated from the North of France, she was hidden and protected during the 2nd WW in the Domaine de la Barraque, close to Ste Eulalie de Cernon on the Larzac. With important means and a quality taste, they undertook heavy works of restoration, well respecting  the style of this patrimony. 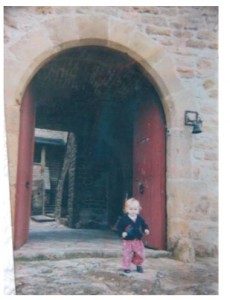 We invested on La Cadenède in 2002, and carry on the restoration works to make the house more userfriendly for families and friends groups. You can see some pictures of the works in the main entrance.

Coming here, you contribute to making it possible to maintain and improve this piece of local history and patrimony. The next restoration works are concerning     the underground grain loft, the wine and the water cistern (partly visible 150 meters on the right side of the domain entrance).